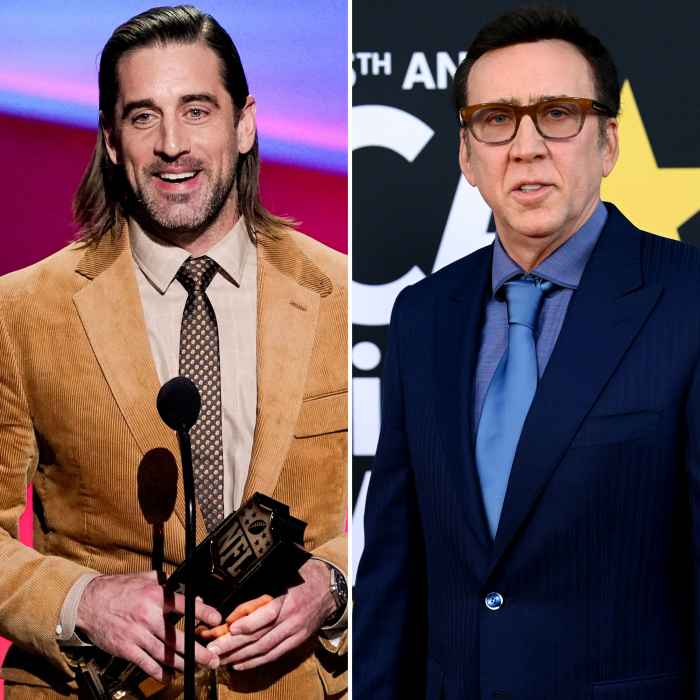 An uncanny resemblance! Aaron Rodgers looked an awful lot like Nicolas Cage’s character in Con Air in a new promotional video for the Packers Training Camp, presented by Bellin Health.

“Let’s do this,” the Green Bay Packers official Twitter account captioned the Tuesday, July 26, clip of Rodgers, 38, striding into the training facility. The quarterback dons a white wife beater and belted blue jeans in the promo. Appearing to pay homage to the 58-year-old Leaving Las Vegas actor’s iconic role, he runs his hands through his long, slicked-back hair.

“The reigning MVP showed up as Nick Cage in Con Air,” the NFL on ESPN Twitter account captioned a side by side shot of Rodgers and Cage, 58.

The football star’s new tattoo, which includes two lions, constellations and a nod to Rodgers’ Sagittarius zodiac sign, is visible in the video.

“First tattoo. From the 🐐 himself @balazsbercsenyi Grateful for his mastery and friendship 💪🏼❤️ 🇭🇺,” the California native wrote alongside an Instagram photo of his new ink on July 6.

“There’s a deep and meaningful story and connection to absolutely each element of this art piece, and I’ll share a little more about that one day. For now, just thankful for @balazsbercsenyi and his patience and artistry,” he continued.

Rodgers is heading into the 2022 training season after finding himself at the center of controversy last year. While speaking at a press conference in August 2021, he made comments about the NFL’s COVID-19 vaccination guidelines that would later come back to bite him.

“There’s guys on the team that haven’t been vaccinated. I think it’s a personal decision. I’m not going to judge those guys. There are guys that’ve been vaccinated that have contracted COVID. It’s an interesting issue that I think we’re going to see played out the entire season,” he said at the time, adding that he had been “immunized” against the coronavirus.

Jordan vs. Aaron Rodgers: Everything We Know About Their Feud Read article

After the athlete contracted COVID in November 2021, news broke that he hadn’t been vaccinated at the time of the now infamous press conference.

“I didn’t lie in the initial press conference,” Rodgers said on The Pat McAfee Show that month. “And at the time my plan was to say I’ve been immunized. It wasn’t some sort of ruse or lie … I found an immunization protocol that could best protect me and my teammates. And it was a long-term protocol that involved multiple months.”

The University of California, Berkeley alum was ordered to pay a $14,650 fee fine for violating NFL protocols. His then-fiancé, Shailene Woodley, defended him from the public outcry.

“Literally, y’all need to calm the f—k down,” Woodley, 30, wrote via her Instagram Story alongside a photo of Rodgers in November 2021. “This is straight up HILARIOUS.”

The NFL star and Big Little Lies alum first sparked romance rumors in July 2020. Rodgers confirmed the relationship in February 2021, announcing that he and the Divergent star were engaged at the NFL Honors Awards. One year later, Us Weekly confirmed that the duo had called it quits.

“They thought [they] were a good match for each other in the beginning but the more they got to know each other they realized their careers, their interests [and] their political views weren’t aligned,” an insider revealed to Us at the time.